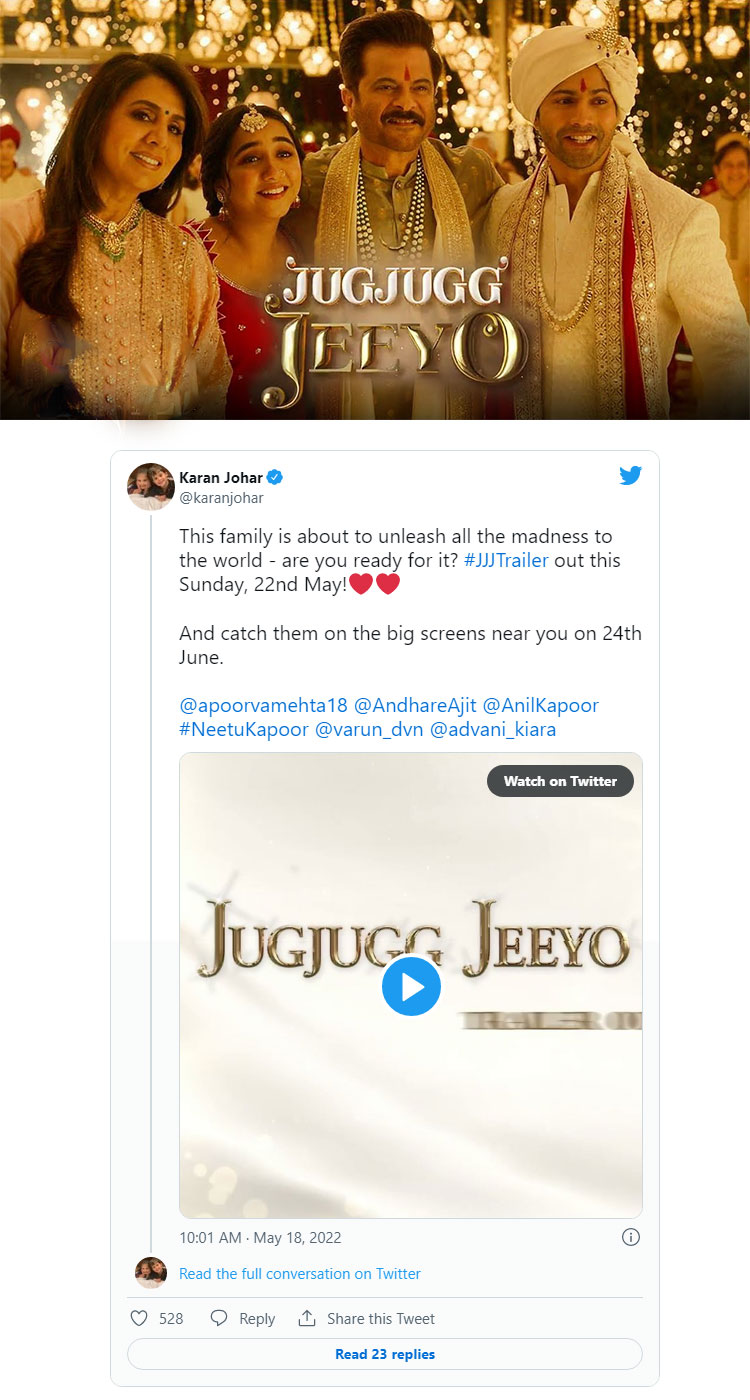 Jug Jugg Jeeyo: Varun Dhawan, Kiara Advani, Neetu & Anil dance it out on title track; Trailer out on May 22

Ever since Jug Jugg Jeeyo was announced, fans of Varun Dhawan, Kiara Advani, Neetu Kapoor, Anil Kapoor and others have been eagerly waiting for the trailer of the film and the reason is its ensemble cast. However, the wait is finally over as Karan Johar on Wednesday announced the trailer release date of the much-awaited film on his social media. The trailer of the film will release on May 22.

Announcing the trailer release date of Jug Jugg Jeeyo on his official Twitter account, along with a short video, Karan Johar wrote, "This family is about to unleash all the madness to the world - are you ready for it? #JJJTrailer out this Sunday, 22nd May! And catch them on the big screens near you on 24th June." @apoorvamehta18 @AndhareAjit @AnilKapoor #NeetuKapoor @varun_dvn @advani_kiara

On Monday, the makers of the film introduced the film's character in the form of small clips. The lead cast introduced their characters in the videos with voiceovers. Anil Kapoor plays the role of a self-obsessed man, Bheem; Neetu Kapoor plays Geeta, who always hopes for her family's happiness. Varun plays the character of a Punjabi boy Kukku who loves to spend time with his friends. Kiara Advani essays the role of Naina, who is here to steal our hearts, Maniesh Paul portrays the role of Gurpreet, whereas Prajakta Koli plays Varun's younger sister Ginni.

Talking about the film, a source had told Pinkvilla, "It's a tale of two couples from different generations, entangled around the issues post marriage. The premise beautifully merges the generation gap and puts out a unique point about love, but with ample of humour. Though the key characters of both the films are two couples, the treatment and the story is in a completely different space. Jug Jugg Jeeyo is more about families, and the bond a married son with his father and mother played Anil and Neetu."