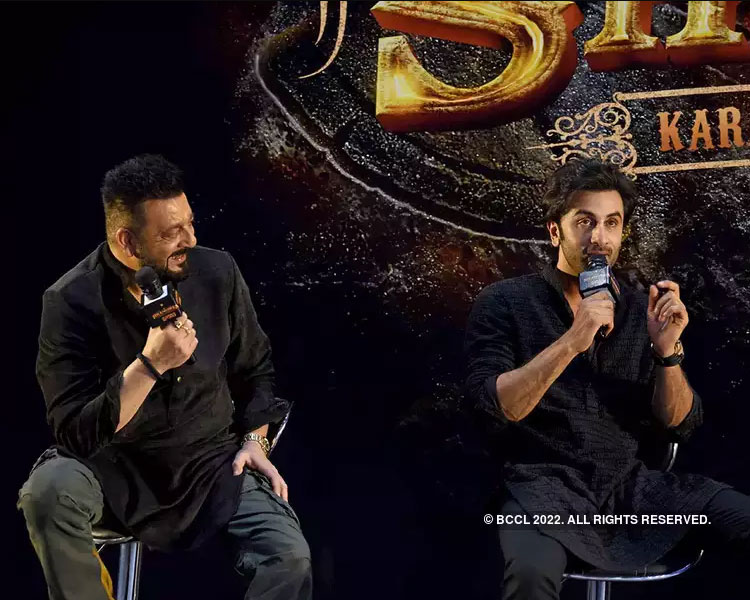 On July 19, Team Shamshera - Ranbir Kapoor, Vaani Kapoor, Sanjay Dutt and director Karan Malhotra - met fans at a mall in Delhi and discussed the film. During the press conference, Ranbir Kapoor recalled the making of Sanju and how Sanjay Dutt motivated him to do an action film when he was doing Barfi.

RANBIR ON PLAYING SANJU ON SCREEN: 'DREAMS DO COME TRUE'

Ranbir - who had posters of Sanjay Dutt in his room while growing up - recalled how he had to recreate one in particular while shooting for Sanju (2018). The poster in question featured Sanjay Dutt in a still from the film Aatish (1994). Ranbir elaborated, "I think he (Sanjay Dutt) was shooting in Mauritius and his hair was flying... that's the poster. When I was doing Sanju, the first thing the art director asked me to do was to recreate that shoot because they wanted to replace my face with his for that poster. It was so surreal because it was the poster I had grown up with on my cupboard. And suddenly, it was my face in that pose on the wall. If you'll see the second scene of Sanju, you can see that image on the wall. It means that you should always dream in life because dreams do come true."

Ranbir said, "When I started my career, I used to work out in Sanju sir's gym. Sanju sir would come downstairs and just look at me lifting weights. One day, he called me and said - 'Yaar, tu do saal se aa raha hai, teri body waisi hi hai. Tu sukhda ka sukhda hai', and then he cracked another joke -'Tu abhi Barfi kar raha hai, agli film kya karega? Ladoo karega? Peda karega? Kuch achchi action film kar'. I think he tried to inspire and motivate me. Coming back to Shamshera, when you have a villain like him in the film - he's like the Thanos of India - as an actor it is an occupational hazard for you. You have to build your body at least a little bit, because I have to stand up against him." He added,"Aaj kal actors ko actor nahi - actor aur athlete banna padta hai. It has become so challenging now."

When asked what he and Sanjay Dutt love about each other, Ranbir said, "Ek hota hai love, but I'm obsessed with Sanjay Dutt."

In reply to a question on whether Rishi Kapoor had seen any parts of Shamshera, Ranbir said, "Papa ne Karan ke saath Agneepath mein kaam kiya tha. That film brought a lot of fame to him and he was very happy with the impact of the film. When I signed this film, he was very happy because he always used to complain about my film choices. He used to say, 'Teri film choices ekdum bakwaas hain. Tu aisi film banata hai, that doesn't reach masses'. Unfortunately, he had not seen the trailer or poster of the film, but I know that he's somewhere out there, proud and smiling at me."

As questions related to box office collections kept coming up, Ranbir clarified that actors don't get a share of the 100 crore earnings. He said, "Yeh joh padhte hain na aap papers mein - 100 crores and 200 crores - yeh kissi ke jeb mein nahi jaata. It all goes to many other people, like distributors, exhibitors and so on, and whatever is left goes to the producer. Director aur actor ko kuch nahi milta."