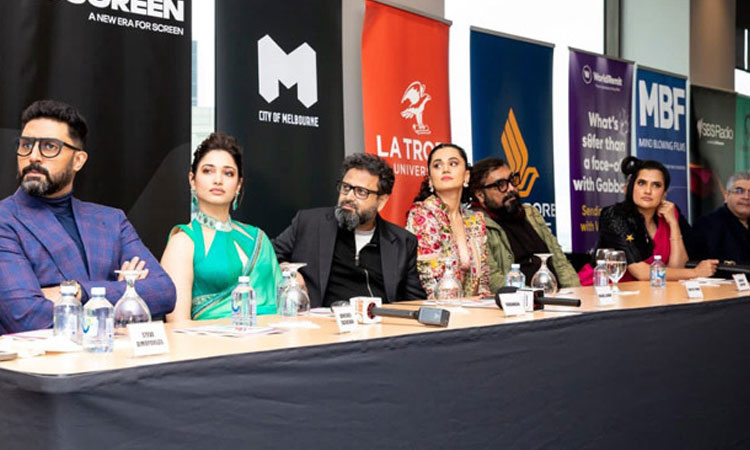 The Indian Film Festival of Melbourne is in its 13th year. The festival was officially flagged off by an array of stars of Indian cinema at an iconic landmark venue in Melbourne, Australia earlier today. The festival is back to being held in person after it was held online for two years. The festival, that is expected to be held from August 12 to August 20, will see some of the prominent celebs in attendance. Abhishek Bachchan, Taapsee Pannu, Vaani Kapoor, Tamannaah Bhatia, Shefali Shah, singer Sona Mohapatra and filmmakers Anurag Kashyap, Kabir Khan, Aparna Sen, Nikkhil Advani, Rithvik Dhanjani and Shoojit Sircar were some of the Bollywood personas who graced the official launch.

The actors took to the podium in presence of a special audience to announce this year's program schedule with Taapsee Pannu's Do Baaraa being the opening night film. Other exciting events lined up, apart from the screening of over 120 films, are the Independence Day Celebrations, an array of panel discussions amongst other specially curated events.

Speaking about being a part of this event, Abhishek Bachchan said, "I'm finally here in Melbourne and I am absolutely loving it! I'm looking forward to watch Do Baaraa. My almost entire family has represented India here and I'm very proud of it. I'm looking forward to being part of all the celebrations and I thank the government and Mitu to have me here. It feels great to be given the Leadership in Cinema award".

Tamannaah Bhatia spoke about the South and Hindi film debate at the festival, when asked about. She responded, "I think this conversation is only unique to India, whenever I travel abroad I never hear people distinguish, they simply call it Indian cinema. And such is the case even here at IFFM. I think what the audiences want is to see pan India films and more of such content is being made and being admired by all."