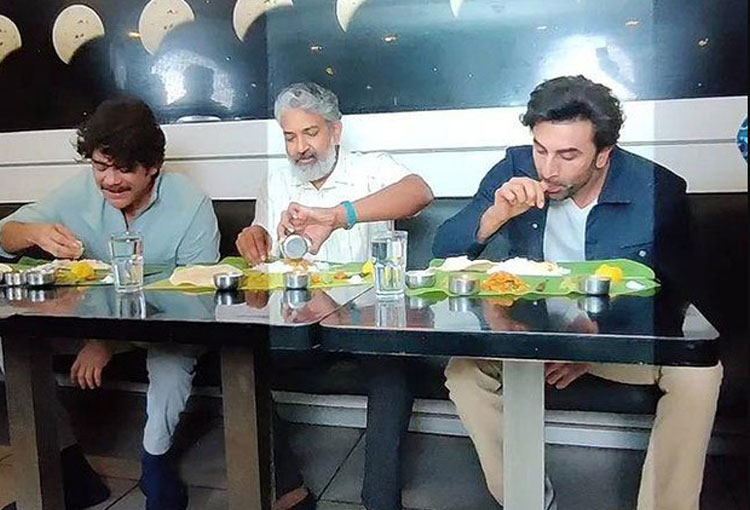 Ranbir Kapoor was seen enjoying a South Indian feast on a banana leaf during the Brahmastra promotions in Chennai, along with co-star Nagarjuna and RRR director SS Rajamouli.

Ranbir Kapoor recently kicked off the promotions of Brahmastra but the actor started off his city tour from the Southern states. The actor was seen promoting the fantasy adventure drama along with Telugu superstar Nagarjuna, who also is an integral part of the star cast, in Chennai. Moreover, as a way of enjoying the traditions and culture of the capital of Tamil Nadu, the Shamshera actor enjoyed a quintessential meal with his co-star and filmmaker SS Rajamouli.

Right after the success of RRR and the trailer release of Brahmastra, Ranbir Kapoor had revealed that SS Rajamouli will extend his support and help to the Dharma Productions film. Keeping up with his promise, the South filmmaker is accompanying the team of the film during its promotions down South. In a recent video that seems to have garnered attention on social media, we saw Ranbir Kapoor relishing a meal with Nagarjuna and Rajamouli. Following the authenticity of the cuisine, the food, which comprises rice and a variety of curry preparations, was served on banana leaf in a traditional manner. The celebrities were seen enjoying it as they ate with their hands like a true blue South Indian.

Speaking of Brahmastra, the film has been in the making for almost seven years. Directed by Ayan Mukerji, it is a part of trilogy and is inspired by the Indian mythology. While it features Ranbir Kapoor as the Astra of Fire, it features Nagarjuna as the Nandi Astra. Further talking about the film, it is also the actor's first film with his real life wife Alia Bhatt. It also features Amitabh Bachchan and Mouni Roy in pivotal roles.

Brahmastra is produced by Karan Johar under his banner Dharma Productions and it is expected to be a Pan India film that will release in Hindi, Tamil, and Telugu on September 11.