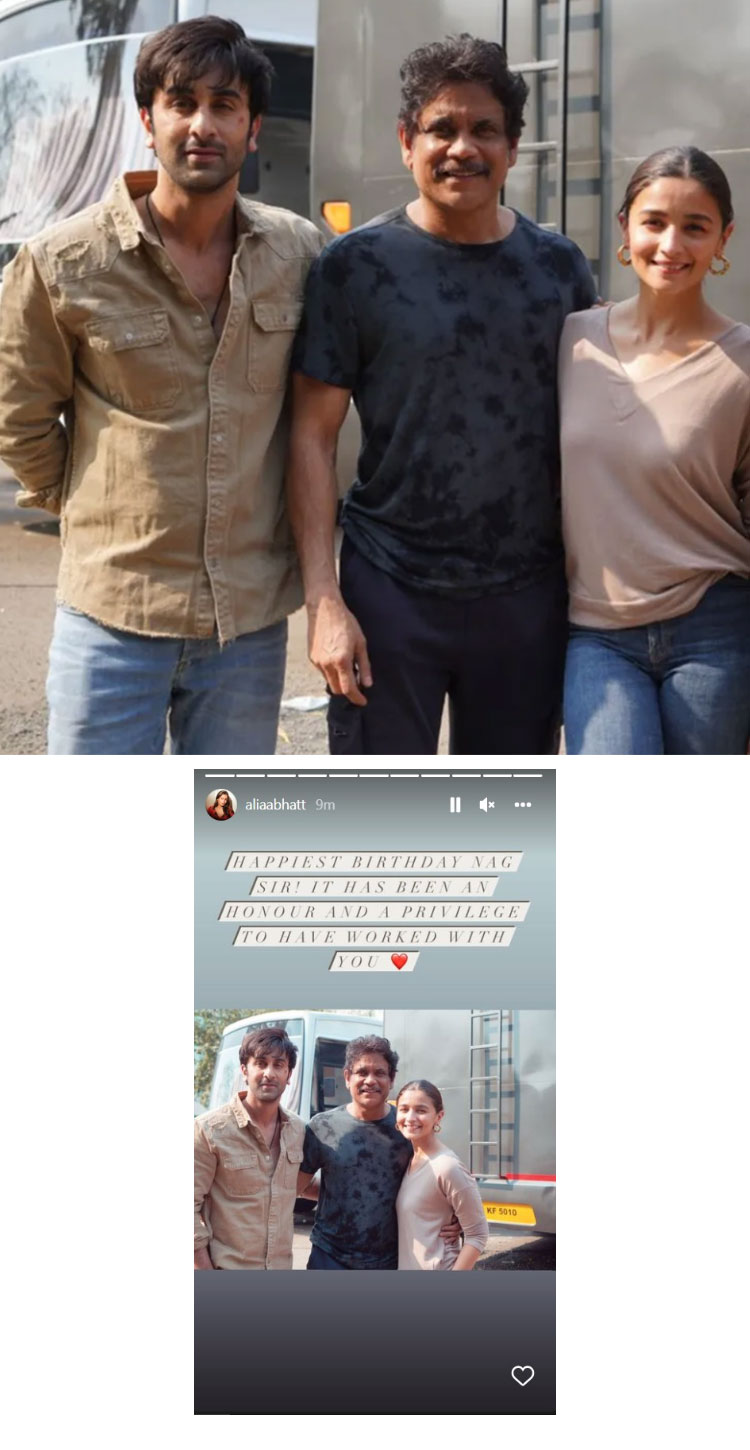 Alia Bhatt, who worked with popular actor Nagarjuna in Brahmastra, shared a heartfelt message for him on his birthday.

Nagarjuna is one of the biggest names in the Telugu film industry. He is the recipient of two National Film Awards, nine Nandi Awards and three Filmfare Awards South. Today, on the actors 63rd birthday, the Bangarraju actor received a heartfelt message from Alia Bhatt. Notably, both the acting professionals have shared a screen space in upcoming film Brahmastra. Directed by Ayan Mukerji, Brahmastra also stars Amitabh Bachchan, Ranbir Kapoor, and Mouni Roy. The movie is slated to release on 9th September 2022.

In 2021, Actor Nagarjuna took to Twitter to inform his fans that he had wrapped his portion in Alia Bhatt and Ranbir Kapoor starrer Brahmastra. He had also shared pictures with the lead pair and film's director Ayan Mukerji.

Remembering the good times, Alia Bhatt today shared this photo again on her Instagram handle and wished Nagarjuna on his birthday. The message read, "Happiest Birthday Nag Sir! I has been an honour and privilege to have worked with you." She put a heart emoji along with it.

Brahmastra, which has been produced on a massive budget by Karan Johar, also stars Amitabh Bachchan in a key role. It is tipped to be the costliest Hindi film ever made. Brahmastra will be released in five Indian languages including Tamil, Telugu, Malayalam and Kannada apart from Hindi.

Coming to his career trajectory, Nagarjuna has acted in over 100 films, predominantly in Telugu, along with a few Hindi and Tamil language films. He began his journey in the film industry as child artist but made his protagonist debut through the 1986 Telugu film Vikram, a remake of Hindi film Hero. Well, from then, it has been continuing to be a good ride for Nagarjuna. He is known for films like Siva, Geetanjali, Ninne Pelladata, Annamayya, Shirdi Sai, Sivamani, Manmadhudu and the list goes on.

Nagarjuna will be seen next in the upcoming film The Ghost. Directed by Praveen Sattaru, Nagarjuna is said to be doing an action-packed role in the movie that also stars Gul Panag and Anikha Surendran in key roles. Sonal Chauhan is the female lead. Produced by Sree Venkateshwara Cinemas LLP and Northstar Entertainment, the film has Saurabh as a music composer.

He is also waiting for the release of his comeback Hindi film Brahmastra, which also features Ranbir Kapoor, Alia Bhatt, Mouni Roy.